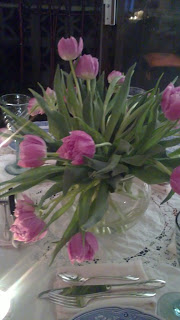 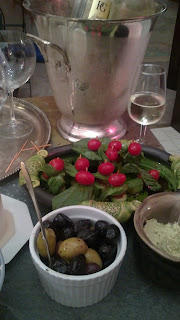 My friend Marla invited a few gals to dinner last night and seriously folks, I'm the lucky one to have this lovely friend!  Marla's place is a little eclectic with silk throws and tassels and all things interesting! Look at our appetizers!  Lovely bread and olives and this amazingly beautiful tomato/basil leaf/and cucumber on toothpicks bathed in balsamic vinegar. And wasabi humus freshly made. We all collected in the kitchen nook as Marla moved the dining table into the living area and isn't that just so perfect as the hub is always in the kitchen.
We chatted, drank wine and Marla cooked a sumptious meal!  It surprises me that we can eat all night when we gather at Marla's place.  Bravo for girls getting together and doing their lovely thing!  Heres to women everywhere just hanging out. It was a lovely evening!

Namaste
Posted by Petra Raschig at 11:28 No comments: 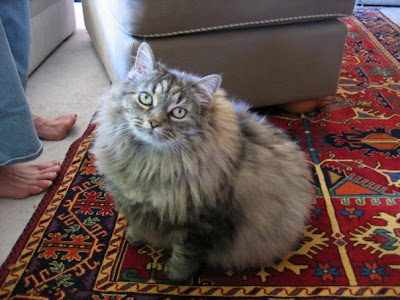 There are so many times when I think of my dear cat Pepsi.  I'm dedicating today as "Dear Pepsi" day!
I LOVED my cat. She had the misfortune of having diabetes for the last 4 years of her life and twice daily I gave her insulin shots.  It wasn't so bad really and never expensive enough that I would consider an alternative.  She was really good to me.  She taught me unconditional love.  Anyone who has given love will always be remembered in love.
I have so many pictures of her around and I'm very thankful for them.  I remember so many fond times with Pepsi.  She had to go places with me and her constant "meows" during the car rides made me cringe and yet laugh.  She was persistant but I knew she was ok.
The moment I walked in the door, she was there at my feet.  As if she instinctively knew my footsteps up the stairs.  She would immediately drop down and roll over!  Exposing her tummy for me to rub.  I'd laugh, drop all my possessions and give her what she and I both so loved.  There was never an argument, or anything but devotion on both our parts.
I so loved my dear cat.
"Dear Pepsi" you have been missed.

Posted by Petra Raschig at 17:33 No comments: 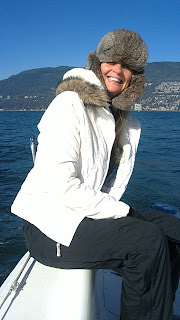 This afternoon I went sailing!

It was such a gorgeous day I did all my work this morning and my friend Andy said "let's go"   Ohhh it was great being out there.  I have missed it.
We live in a wonderful city here in Vancouver!  Wait till there's snow in the mountains............then it's really cool being out there.
Ahhhhhh this would be my life!
Namaste 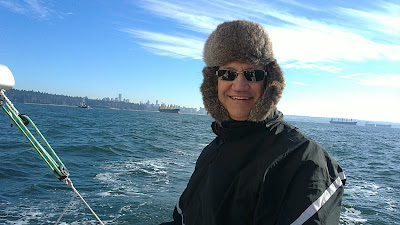 Posted by Petra Raschig at 16:56 No comments:

what r you doing to reduce your carbon footprint?

I decided this morning to go through that pile of newspaper and books by my couch that I somehow never have the time to get to! Make the time I say to myself, and so I came across an article that concerned me.  Do you know since Canada took the oath in 2007 to follow the Kyoto Protocol (good on us) and internationally committed ourselves to reduce carbon emissions.....we're falling at a 90% rate in our accountability currently than we were in 2007! And yet our govt has managed to spend more than $9 billion in climate-change measures!  I think Al Gore is turning in his grave. (if he were dead - )
I'm not going to start ranting here, or get in a protest line with signs and petitions (Mother Theresa once said that the only "march" she would participate in was in one for peace....  I follow her) But I am going to step up on getting on my bike a little more.  That's why I live in the city - to use my car less.  Do you know my sister spent over 3 hours the other day in her car getting into the city?  If there's one accident on any of the bridge routes, traffic is a nightmare!  Right now our city mayors are voting on extending the translink system and yes it will cost us more. ....but good on them! I am willing to pay the extra even though I live in the city.
My readers are hopefully all about saving our world by example.  I can't tell you how many times I hear, " My recycling is not going to make a difference".  Man, I just want to get inside that pea brain of theirs and pull that pea out!
We all make a difference and I for one can only make my own.  I'm extremely proud of my 25 year old daughter Megan who's carbon footprint in this world is like "0"! I believe most of her friends and our young generation is setting the right example.
At least we're getting that right.
Namaste

over-out
Posted by Petra Raschig at 09:23 No comments:

ok maybe donuts are better than coffee with your friends! 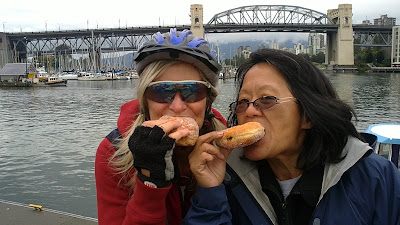 The rain has stopped for a bit! Time to get out for a wee break from the computer, call a friend and cycle around for some exercise! My friend Penny finally moved back to the city from Coquitlam (ya think!) and she lives one street over from me. What a blessing.
"Penny can ya come out for a wee cycle?"
"what time?"
"Now!"
"Give me 10 minutes...."
The cycling here is pretty great but when you add Bavarian Creme doughnuts and Cafe Ami to the mix.......well one just has it made! Normally I'd call it a pass on the doughnuts (in trying to keep my figure svelt!) but Penny's description of oozing chocolate and sugar coated melt-in-your-mouth glaze made me throw my hands up in the air in defeat!
Well worth the sacrifice.
"What time we cycling tomorrow Penny?" 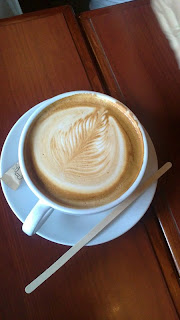 Having coffee with your girlfriend is the best isn't it!  My friend Martes and I have been getting together most every week to catch up AND to work out starting a social media business together.......the days are really busy though with me still searching for a full time job and Martes working part-time and taking care of her lovely 2 year old Evelyn!
When I think about all the things a woman can do in a day.......I remind myself that "yes coffee with your girlfriends" is a must!